A downloadable Apache helicopter for Windows

Take the role of Sheriff Desert Bus and take back control of your town's runaway train. Something evil is afoot, and it smells like... alien.

The Evil Emperor Zoltar is back, and he's got his hands on an army of goons and a strange Device. The Device enabled him to take over the train, and you've got to fight your way through the goons to find and destroy the Device. It'll take 3 hits, by the way. Using your lasso, hop through windows and search the train on the inside and outside for the Device. Don't turn back, keep moving forward. Don't get too close to the cacti (they have a history of exploding).  If you have any questions, or you'd just like to chime in about your experience with the game - please drop us a comment below! We love hearing from you, and we hope you enjoy Showdown at Desert Bus!

This is a difficult game. Please read the How To Play screen. Make sure to use all of the tools at your disposal, including the lasso, the whip, and the revolver. Don't forget to regularly check the outside of the train cars for the Device spawning out there. Make every shot count, and reload as often as possible. Don't be afraid to look for opportunities to lasso your way out of danger. When you get your combo up, killing enemies restores health. It's a good idea to try and restore your health to full before launching yourself back into the danger zone.

Unfortunately, few game jam games are without bugs, and this is no exception. Loading the game can take up to about a minute. Your lasso stays captured around destroyed enemies and objects. You can get turned over, so don't be afraid to use your reset button. Your camera phases through walls, so try not to get caught in corners or it'll become difficult to see. If you can't defeat the Device in 50 train cars, you will run out of train to spawn - on average, it shouldn't be an issue to win before that. (If you can actually survive 50 train cars, then you shouldn't have any problem beating the game.) If cacti stop spawning, don't worry about that - you can continue playing as normal. When you win the game, the controller input may not work for you in the won-the-game menu: it should work everywhere else. Probably.

Caxt Nova - All-around all-star all-the-time, first person to officially beat this game, made the bus, made that sweet revolver and lasso, played the music (with my mouth, like on instruments, like I actually bought a didgeridoo and blew air through it for that sweet combo BGM music), designed and implemented them mechanics, and did other stuff good too

Tops - Who was once Menu Boy, then graduated to Menu Master, but was dethroned to become Menu Guy, only to learn the secrets of the Menu Warlocks and Sorcery Association, to then finally retire and live out his days in the foothills as a Menu Ranger

Vanilla Gorilla - Car physics, and other little stuff here and there

this was fun!! Had some audio problems though

Thanks so much for the video! Sorry about the audio, but we love seeing other people check out the game!

my play through here:

even though I most definitely didn't beat your time I enjoyed the game it feels really rewarding getting your shot placement down with the controller. I honestly think the random spawning of the three things you're supposed to be looking for was probably my least favorite part, but the game play is solid the bus controls wild and reminds me a bit of twisted metal. The quirky sound effects are a plus too.
Reply
caxtnova7 days ago(+1)

Thanks FluffeyPanda, glad you enjoyed it! You're a great shot with that revolver!

Thank you again for making the game and commenting! hopefully run into more of your games in the future! ^^

Here's my personal best time. Think you can beat it? 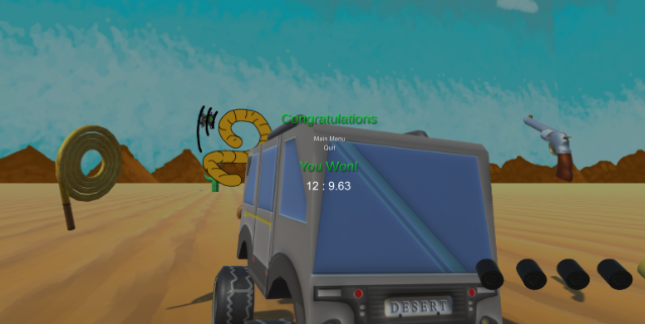 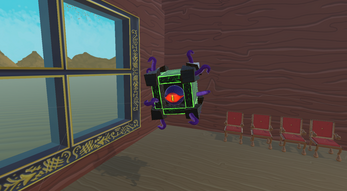 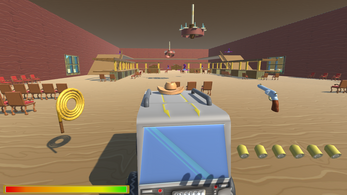 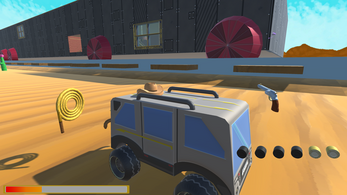 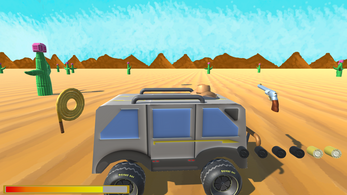 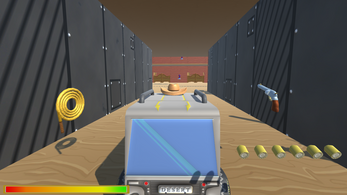